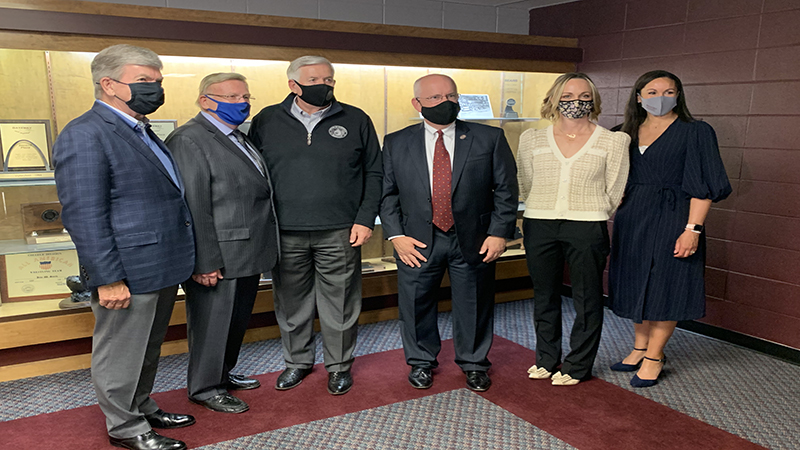 Missouri State University and the Springfield-Greene County Health Department’s mega-vaccination event kicked off Thursday with appearances by the Governor and Senator Roy Blunt. The leaders were in town to honor the staff and volunteers who were making the event possible.

The Governor was concerned about the state reaching levels of herd immunity through increased numbers of vaccinated individuals. He said that once the people who were motivated to get vaccines and signed up on lists with the state and hospitals get their shots, more will be needed to be done to motivate people to get vaccinated.

“I would say in two to three weeks, especially in southwest Missouri, we’ll literally be trying to figure out ‘how do we get vaccine in people’s arms?'” Governor Parson said. “I don’t think we’re going to see runs on mass vaccine like we’re seeing now. As the hospitals go through their lists, as the health care systems go through their lists, I think we’re going to have to reach out and encourage people to take the vaccine. I think we’re two to three weeks away from that.”

Senator Roy Blunt said events like today’s at Missouri State were only possible because the Trump Administration took the advice of Congress and backed multiple vaccine manufacturers in their research, allowing for rapid production of approved vaccine.

“If we hadn’t been forward leaning enough to take a chance on some vaccines that didn’t make it, we’re not trying hard enough,” Blunt said. “You know the old adage that ‘failure’s not an option?’ This is a situation where I said ‘failure’s almost a requirement.’ If you’re trying hard enough to get vaccines approved quick enough, having one or two that don’t make it mean the three or four or five who do make it will be available quicker.”

The event has enough vaccines for 10,000 residents to get vaccinated. On day 1, just over 1,700 people were given the one dose Johnson & Johnson vaccines.

Friday, the event is open to all Missouri residents who are over 16 years old, and walk-ins are being allowed to get their vaccination.