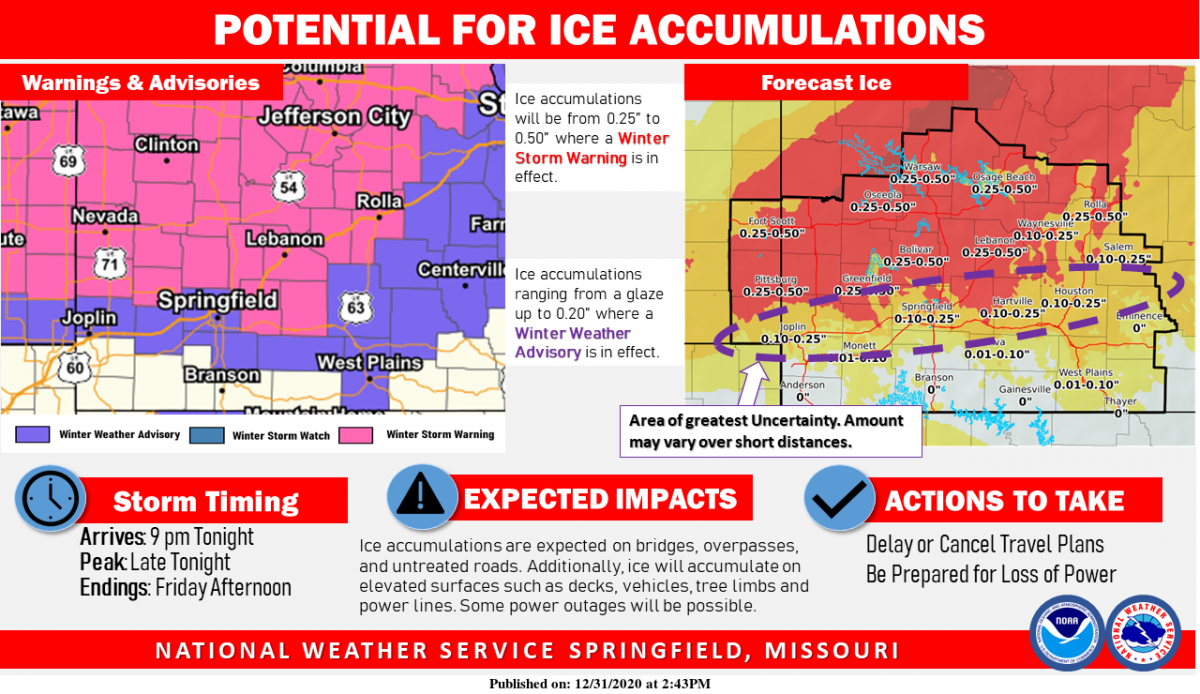 Accumulating Ice Possible in the Ozarks: Get Statewide Road Conditions

Freezing rain will cause ice to accumulate on bridges, overpasses and untreated roads late Thursday night into Friday morning.

Areas along the Highway 60 corridor, including the city of Springfield, are under a winter weather advisory starting at 9 p.m. Thursday and going until 12 p.m. on Friday..

Ice accumulations are expected to range from .25 inch to .50 inch in areas under the winter storm warning, while communities in the winter weather advisory can expect a glaze up to .20 inch.

Ice will accumulate on elevated surfaces, such as decks, vehicles, tree limbs and power lines.

Forecasters say be prepared for some power outages, especially in the warned area in west central and central Missouri, extending down into the northern Ozarks.

If you have travel plans for New Year’s Eve or New Year’s Day, check out statewide road conditions with the MoDOT Traveler Information Map.

A large storm system will move into Missouri late Thursday afternoon and Thursday night, bringing rain and freezing rain, even light snow to parts of the state.

The National Weather Service says the heaviest ice accumulations will be over west central and central Missouri, where a winter storm warning is in effect from New Year’s Eve into New Year’s Day.

Ice accumulations ranging from a glaze up to 0.20 inch will be possible in the warned area.

A winter weather advisory is in effect for the northern Ozarks from Osceola over toward Hermitage.

For the rest of southwest Missouri, including the Springfield metro area, we’ll have rain that may change over to some sleet or freezing rain, but then transition back to rain as temperatures warm overnight.

Minimal travel impacts are expected for areas along the I-44 corridor, including Springfield.

Watch for ice on bridges and overpasses.

If you have travel plans for New Year’s Eve or New Year’s Day, check out statewide road conditions with the MoDOT Traveler Information Map.

Previous Light Snow Accumulations On Grassy Surfaces
Next More Than 66,000 Have Been Vaccinated for COVID-19 in Missouri