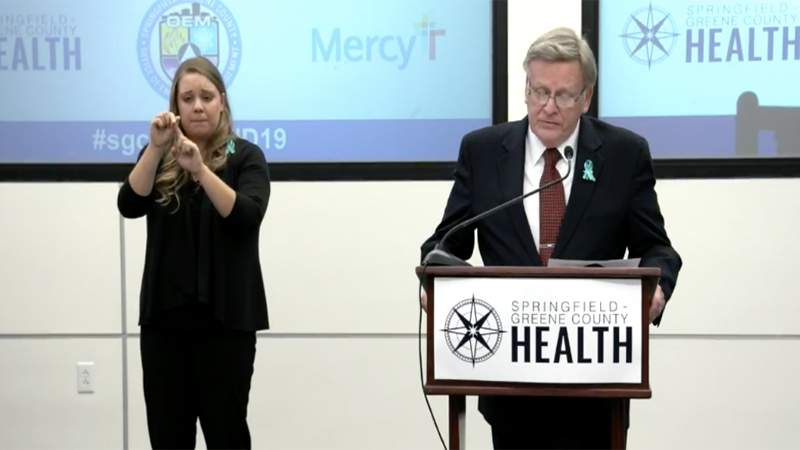 Springfield and Greene County officials said the city and county are in the midst of a second wave of COVID-19 at a Wednesday afternoon press conference.

“It is clear to me we’re currently in the teeth of a second wave of COVID-19,” Springfield-Greene County Health Department Director Clay Goddard said.

Springfield Mayor Ken McClure said that masking is now more key than ever in helping to stop the spread of the virus.

“The simple act of wearing a mask becomes a powerful tool in the fight against COVID-19,” McClure said. “Especially when done in conjunction with other safety measures.”

The Mayor called again on Governor Mike Parson to put a statewide masking mandate in place, a position that several city council members like Craig Hosmer have called for in Council meetings.

McClure also referenced the number of city residents who have lost their lives from complications of COVID-19, noting he had lost three close friends to the virus.

“To those who doubt the reality of this pandemic, this is vivid and a very stark reminder,” McClure said.

McClure said that despite the spike, he would not be advocating for steps to close down the city or put further restrictions on businesses because there is no federal funds, like the CARES Act, coming to help small businesses.

When asked by reporters, McClure said the members of City Council were united behind his position and had not asked him to lock the city down further than current restrictions.

Greene County Presiding Commissioner Bob Dixon expressed his support for communities that are putting a masking ordinance in place, and said that residents should be using masks.

However, when asked if the County Commission would put a mandatory order in place, Dixon said that they would not be doing it because the County has no way to enforce any mandate.

Springfield’s current masking ordinance remains in effect until January 9th but can be extended by a vote of City Council.