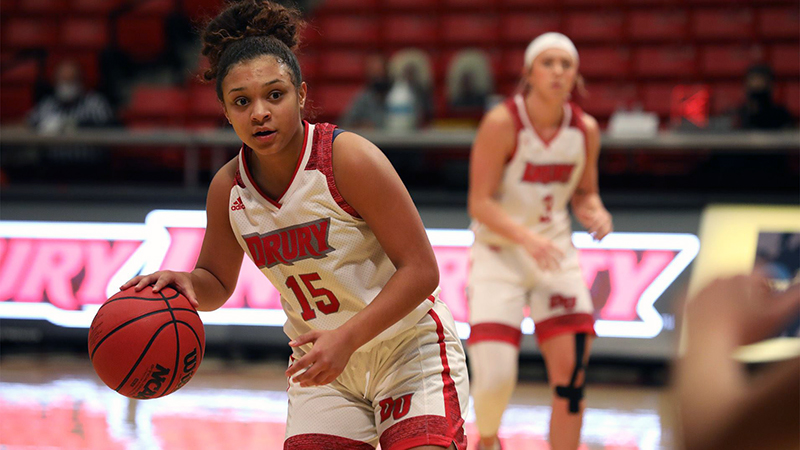 679 days. That’s how long it’s been since the Drury Lady Panthers experienced a loss.

It’s been even longer since they experienced one at home or in the Great Lakes Valley Conference, but the Rockhurst Hawks ended several Drury winning streaks with a 75-69 win over the top-ranked Lady Panthers on Tuesday at the O’Reilly Family Event Center.

Rockhurst scored the game’s first 10 points and led 21-2 late in the first quarter before Drury responded to cut the Hawks lead to four, 26-22, with 6:13 left in the second quarter. Rockhurst managed to push their lead back to 13 at halftime, 38-25.

Drury (10-1) would get as close as two several times in the second half and trailed 62-60 with 2:43 left following a three-pointer by freshman Allie Clevenger. Rockhurst’s Keegan Sullivan answered with her own three on the next possession, though, and the Lady Panthers were never as close again.

Rockhurst never relinquished the lead in the game and raised their record to 7-5. Sullivan finished with 21 points while her sister Daly Sullivan added 20. Monika Faerber added 16 points and 21 rebounds as Drury was beaten on the glass 51-29.

Paige Robinson led Drury with a game-high 28 points, had 8 rebounds and four blocked shots. Azia Lynch and Emily Parker both had 11 points for the Lady Panthers.

The loss snapped Drury’s 42-game winning streak and was their first defeat since the NCAA-II national semifinals on March 27, 2019, when they fell to eventual national champion Lubbock Christian. It was also Drury’s first regular season loss since Jan. 18, 2018, snapping a run of 76 straight victories and was their first GLVC loss in 59 games.

Drury plays again on Thursday when they host Lindenwood for a 5:30 pm game at the O’Reilly Family Event Center.