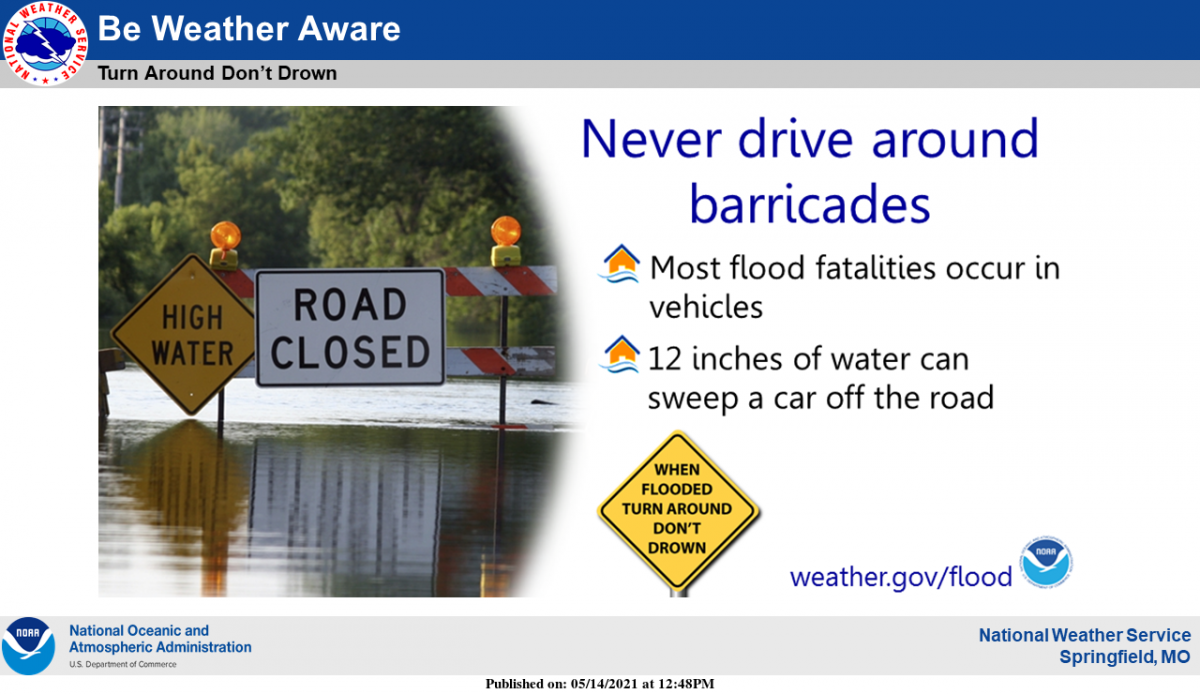 The towns of Aurora, Marionville and Verona have been especially hard hit.

Get the latest road closings here with the MoDOT Traveler Information Map.

The National Weather Service says five people were on the roof of a house just north of Verona to escape flash flooding.

Fire and rescue in Marionville is reporting at least five homes have been flooded, with numerous water rescues ongoing. Highway 60 and County Road 1140 flooded, contributing to a crash with multiple injuries.

Another water rescue was reported in the area of Highway 60 and Lawrence 1160 just after 11 p.m.

Crews were also dispatched to a water rescue on Oak Street in Verona, with water in a residence.

A rain guage just south of Verona measured 5.99 inches of rainfall through the day Monday.

The National Weather Service issued a Flash Flood Warning for northwestern Barry and southwestern Lawrence Counties until 5 a.m. Tuesday. One to two inches of rain had fallen in these areas, with additional amounts of up to two inches possible.

Just after 10:30 p.m., a water rescue was completed in Aurora, with crews responding to assist another agency for a rescue just outside of Verona.

Another Flash Flood Warning was issues for southwestern Lawrence County until 4:15 a.m. Tuesday, with between two to four inches of rain having already fallen. Flash flooding is expected along the Spring River basin, as waters move in from upstream.

Forecasters are calling it a “considerable” Flash Flood Warning. We’ve had reports of flooding happening along a headwater tributary of Spring Creek, with a water rescue along Pine Road in the Christian County panhandle.

A Flash Flood Warning is also in effect for northwestern Greene County and southwestern Polk County until 1 a.m.

Some of the other locations that will experience flash flooding include Ash Grove, Walnut Grove, Morrisville, Aldrich, Eudora, Sacville, Cave Spring and Stockton Lake,

In addition, there’s been excessive rain in the Republic area.