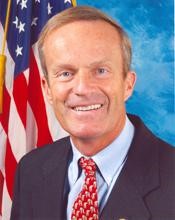 Former Missouri Congressman Todd Akin has died at the age of 74.

Akin died at his home in the St. Louis suburb of Wildwood.

Perry Akin says the former congressman was a devoted Christian, a great father, and a friend to many.

Akin, who was a strong opponent of abortion, hurt Republicans’ chance of recapturing a Senate majority when he was asked during an interview whether he supported allowing abortions for women who have been raped.

He answered “from what I understand from doctors,” such pregnancies are really rare. He went on to say: “If it’s a legitimate rape, the female body has ways to try to shut that whole thing down.”