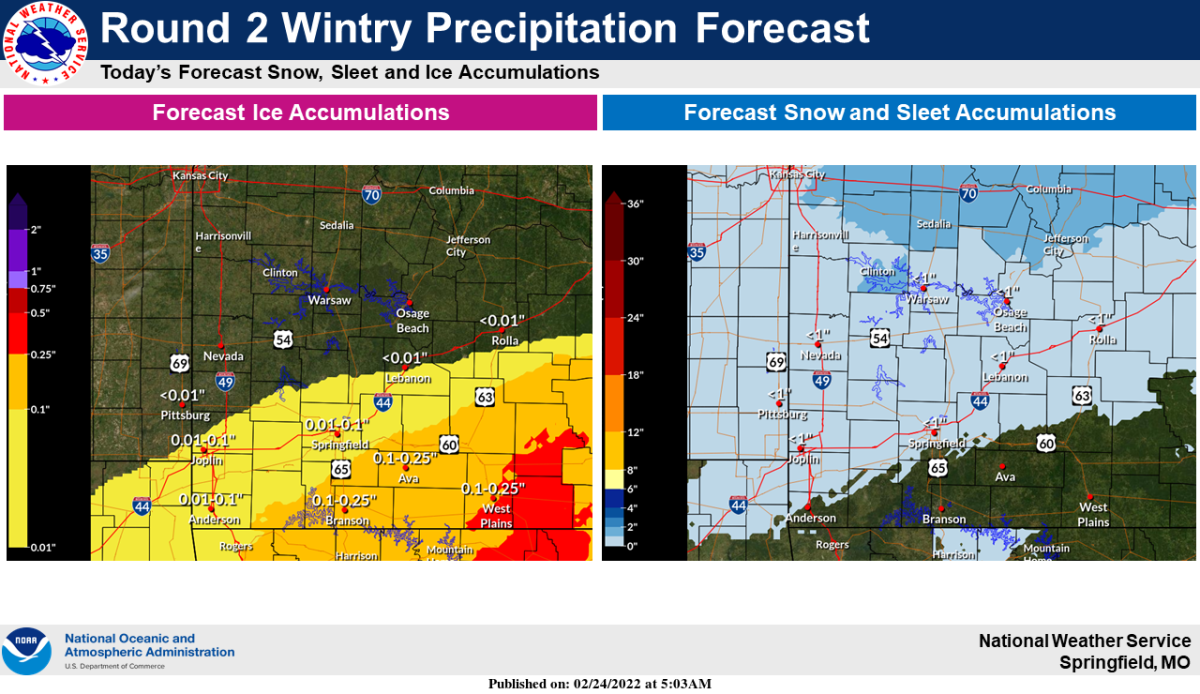 Freezing Rain and Thunder Sleet Falls in the Ozarks

Freezing rain and sleet began falling in the Springfield area around 8:00 a.m. Thursday and the wintry mix is expected to taper off from west to east across the area in the afternoon and early evening.

The Winter Storm Warning that has been in effect has now been downgraded to a winter weather advisory for all areas along and south of I-44 through 9 o’clock.

We’ve had several reports of thunder sleet and freezing rain with thunder in southwest Missouri through the late morning hours.

It started with reports of thunder and lightning with moderate sleet in Neosho around 7:45 a.m., moderate sleet in Republic just after 8:00 a.m., and even two and a half inches of snow on top of a freezing rain/sleet mix in the Irwin area of Barton County northwest of Springfield.

We had heavy sleet and lightning in the Marshfield area around 10:30 a.m., with thunder sleet seven miles south of Nixa High School in northeastern Stone County around 10:15.

The National Weather Service advised of a strong thunderstorm impacting portions of western Taney and southeastern Stone Counties between 10:12 and 10:45 a.m., with the potential for hail up to the size of pennies.

Heavy sleet also fell Thursday morning in the Marshfield and Niangua areas, and in the Cross Timbers area in Hickory County.

Freezing rain was reported in south Springfield at 9:15 a.m. and a combination of freezing rain and sleet at the National Weather Service office in northwest Springfield.

We had thunder in Springfield during the 10 a.m. hour.

And a number of communities in the northern Ozarks are reporting accumulating snow.

The National Weather Service says we’ll continue to see some heavier sleet and/or freezing rain showers, especially east of Springfield with thunder in some of the stronger cells as we go through the afternoon.

The predominant precipitation type will continue to be sleet and snow further north, with sleet and freezing rain to the south.

The MoDOT Traveler Information Map shows sleet/ice covered roads on major highways in the Springfield area and much of the Ozarks through 11:00 a.m.