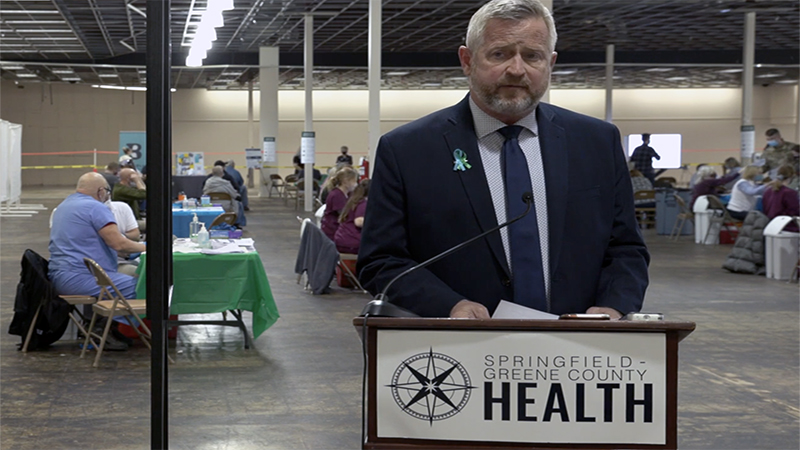 Goddard Thanks Community, Calls out State Legislature in Final Comments

On his last day as the director of health for Springfield and Greene County, Clay Goddard had a few strong words about the pandemic and Jefferson City officials as he addressed the media at the Jordan Valley Community Health Center mass vaccination on Friday.

He said that many community members were giving him too much credit.

“We are not where we are today because I happened to sit in the director’s chair,” Goddard said. “We’re here today because our community stepped up to the challenge, made some really tough sacrifices, and really took care of one another. That’s what good communities do.”

After he finished praising his staff for their efforts, Goddard turned his attention toward the politicization of the pandemic.

“While health departments around the state should have been teaching our communities about the virus, teaching people how best to protect themselves, and combating virus misinformation, we were fighting completely unnecessary political battles,” Goddard said. “The people who should have been our backup were lobbing grenades at our backs because the political winds were much more important.”

Goddard went on to be critical of actions in the state legislature to strip local authorities from being able to decide what to do for their communities.

“This has now manifested itself in Jefferson City as multiple bills that will strip local communities of their abilities to address crisis situations,” Goddard said. “Missouri is too diverse to always use cookie cutter approaches.”

Goddard praised Governor Parson’s support of local control, although he noted they diverged when it came to a statewide masking mandate.

“We are following the rules,” Goddard said. “Our City Council and Greene County Commission took action early and bought our healthcare workers much needed time to prepare.”

“Now the state legislature wants to change the rules in the middle of the game,” Goddard continued. “I’ve listened to the debates and all I hear is hyperbole, political posturing, and Monday morning quarterbacking as they talk about punishing communities for doing their jobs.”

“In a time when people are dying, ill-informed rhetoric is deadly,” Goddard said. “Adding a layer of bureaucracy and response to actions taken in a one-in-a-hundred-year crisis is foolish and poor public policy. I hope that we can change the focus to improving our public health system rather than tearing it down. The stakes are too high to further handicap a neglected public health system.”

Goddard thanked local elected officials as he concluded his comments, singling out Springfield Mayor Ken McClure for his efforts.

“He is a wise, brave, and passionate man, and I’m honored to have served as his health director,” Goddard said.