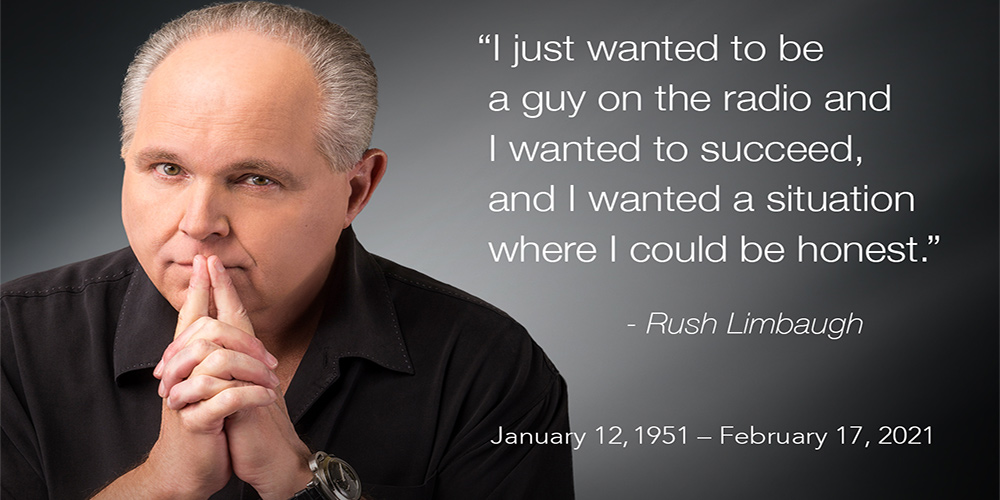 Rush Hudson Limbaugh III, known as “America’s Anchorman,” has died from lung cancer at the age of 70.

Rush’s wife Kathryn made the announcement of his death this morning at the opening of his radio show Wednesday.

Limbaugh announced he had stage IV lung cancer in January 2020.

Rush Limbaugh is considered to be the father of modern American talk radio. He began his radio program 33 years ago on national syndication on just 56 radio stations. The Rush Limbaugh Show grew to 600 affiliates, with an average audience of 27 million listeners each week.

Limbaugh was born January 12, 1951, in Cape Girardeau, Missouri, and began his radio career in 1967 when he was 16-years-old. He began his on-air career as a DJ named “Rusty Sharpe” at KGMO, a station that was co-owned by his father.

Through the 1970s, Limbaugh was fired from radio stations in Missouri and Pennsylvania for being “too controversial” as a news commentator. He ended up a ticket salesman for the Kansas City Royals, when a radio executive friend obtained an opportunity for Rush to replace Morton Downey, Jr. at KFBK in Sacramento, California.

In less than a year, Limbaugh was the top radio show in Sacramento.

In 1987, the FCC repealed the “Fairness Doctrine,” which required TV and radio station to provide an equal amount of time to each side of a political argument. Rush began the The Rush Limbaugh Show, syndicated from New York City, on ABC Radio Network August 1, 1988.

In his last broadcast of 2020, Limbaugh told listeners that he had outlived the amount of time his doctors said he had left and that he was still feeling “pretty good.” Many listeners at the time thought the broadcast sounded like Limbaugh was saying goodbye although he continued to make appearances in 2021.

Rush leaves behind his wife Kathryn. He had no children.

Rush was remembered by colleagues and political figures:

Zimmer Radio Group owner John Zimmer: “[In the beginning] he brought forth a conservative message that was really unavailable at the time nationally on a mass media basis.”

Missouri Senator Roy Blunt: “From his first job in high school as a radio personality in Cape Girardeau to the EIB Network, Rush Limbaugh changed the way Americans talked about issues every day. He reshaped talk radio and became one of the most powerful conservative voices in our country, but always stayed grounded in his Missouri roots and Midwest values. I, along with millions of others, will miss hearing his unique perspective.”

Missouri Senator Josh Hawley: “A proud son of Missouri, Rush Limbaugh was a voice for the voiceless. He changed talk radio, but more importantly, Rush changed the conversation to speak up for the forgotten, and challenge the establishment. He lived the First Amendment and told hard truths that made the elite uncomfortable, but made sure working men and women had a seat at the table. Erin and I are praying for the Limbaugh family.”

Commentator Brit Hume: “More than any single person, Rush Limbaugh helped break the left’s monopoly in the media. The left is still dominant, but not to the extent it was before he came along. He waged a brave struggle against deafness and later, the cancer that killed him. He was a giant.”

Rep. Jim Jordan: “Rush Limbaugh was an icon, patriot, and American hero. No one fought harder for freedom and liberty.”

Former Missouri Speaker of the House & KWTO Wake Up Springfield Host Tim Jones: “Rush Limbaugh embodied and communicated the conservative message and the meaning of America First long before anyone else. He has been the King of Conservative Radio so many of us in the business have always aspired to emulate. As a student and now practitioner of the beauty, art and science of radio communication, I am honored to be on KWTO, an historic Rush Limbaugh station, where I will continue to strive every day to embody and project the American spirit that the legendary Rush brought to every single show for decades. God Bless you Rush, you made America a better and more perfect Union.”

Former Arkansas Governor Mike Huckabee: “Saddened by news of the death of Rush Limbaugh, whose wit and wisdom comforted conservatives and confused leftists. He loved God, America, and his audience. His impact on broadcasting will never be equaled.”

Florida Governor Ron DeSantis: “Through hard work, the will to succeed, and yes, talent on loan from God, Rush became the most dominant radio personality in American history…Rush is the GOAT – of radio, of conservative media, and of inspiring a loyal army of American patriots.”

Senator Rand Paul: “RIP to a legend and a patriot, Rush Limbaugh. Not many people can say they revolutionized and stayed at the top of an industry the way he did. My condolences to his family.”

Former Missouri Speaker of the House Elijah Haahr: “RIP to The Godfather of modern talk radio Rush Limbaugh. I grew up on my dad’s construction job site listening to Rush every day from 11 to 2. His impact on radio and the GOP is impossible to overstate.”

Previous Rate of New COVID-19 Cases Continuing to Drop in Greene County, Along With Hospitalizations
Next Rush to Judgement by Jim Bohannon