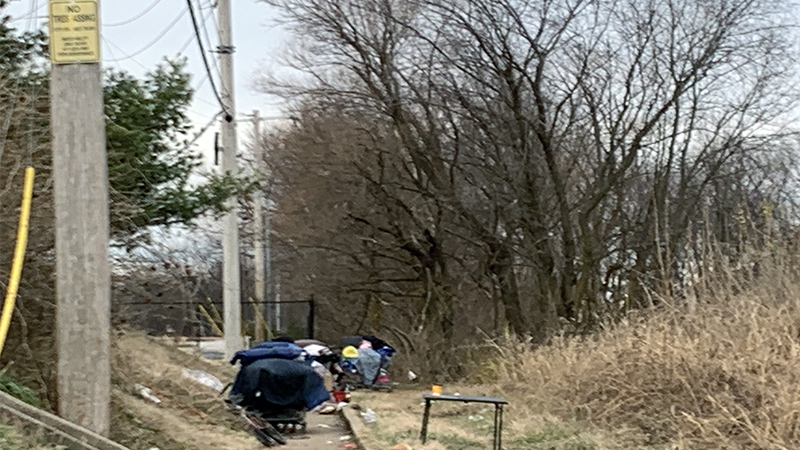 A group of homeless people illegally squatting on private property in north Springfield are being given until Monday to leave after initially being given just an hour to leave.

The City of Springfield had contacted Lurvey Associates, the owner of 2005 East Kearney, about 6 nuisance violations related to homeless who had been living in a wooded area at the rear of the property:

The violation notice from the city said that failure to meet the deadline would trigger legal action that could bring significant costs and fees.

Lurvey Associates hired a contractor to clean out the property and to cut down trees. The contractor showed up at the property Friday to begin their work, and told the homeless on the property they had an hour to pack their belongings and leave, which lead to a conflict.

Springfield Police were called to the scene, and the landowner agreed to the city’s protocol for the moving of homeless camps:


While the protocol says that a camp is moved after 24 hour notice, the landowner told the city they would not resume work on the property until Monday.

“In hindsight, BDS should have activated the homeless/unsheltered protocol upon seeing that activity.  By activating the protocol, One Door would have been notified of this need before today,” City of Springfield PIO Cora Scott told OI.  “We will be clearer in the future with respective departments on the triggers to activate this protocol. One Door is following up with partners to do assessments and will follow up on placements.”

The One Door program through the Community Partnership of the Ozarks helps coordinate intake, assessment and referrals for housing and shelter services. They serve those who are homeless and those who are in immediate risk of homelessness, and are located at the O’Reilly Center for Hope.

Local homeless advocates say there are not enough shelter spaces for all the people who will need to vacate the campsite. A new cold weather shelter has opened at the Unitarian Universalist Church, which could add around 20 beds for those in need, as space is limited by COVID-19 restrictions. All shelters are in need of volunteers to help provide the necessary services to those seeking shelter.

The Gathering Tree, the group behind Eden Village, also announced they will be placing teardrop trailers on a property that the city has OK’d for use as a mobile home park. That facility will be available when a bathroom and shower facility is installed on site.