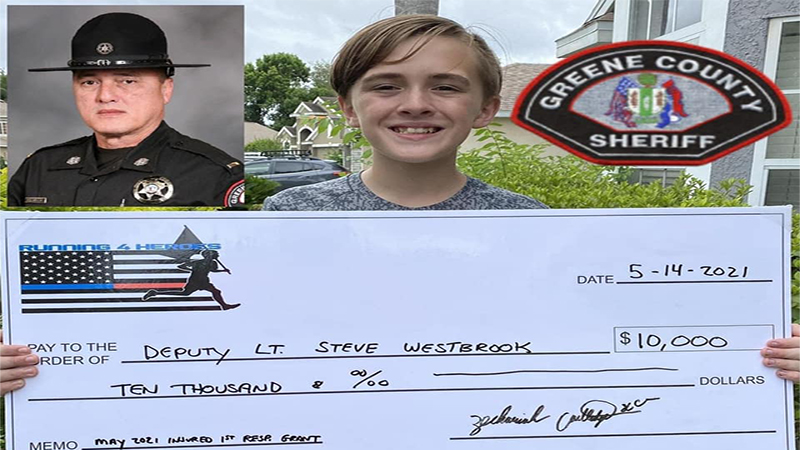 A Greene County deputy seriously injured during a December 2020 incident has received a $10,000 grant from Running 4 Heroes.

Lt. Steve Westbrook has been given the R4H Injured First Responder Grant for the month of May. The organizations has given more than $136,500 in grants to 18 first responders in the United States who have been injured in the line of duty.

Lt. Westbrook was injured in December 2020 when a domestic violence suspect who was fleeing from multiple law enforcement agencies drove off the road and struck Westbrook’s vehicle in an apparent deliberate action. Lt. Westbrook was standing next to his vehicle at the time. The collision threw the deputy a significant distance causing significant injuries that required multiple surgeries.

Running 4 Heroes was created through the passion of Zechariah Cartledge, a young man with a passion for running. Zechariah was inspired by the Tunnel to Towers Foundation, who provides housing for veterans and first responders critically injured or for the families of those men & women if they give their life while on duty. He began to raise funds for first responders through running.

“Our First Responders do so much for us. I want to let them know they are appreciated,” Zechariah said.

Zechariah, his father, and members of the Running 4 Heroes Board of Directors came to Greene County on Saturday, May 22, to present the grant to Lt. Westbrook.

“It is such an honor for this young man to recognize Lieutenant Westbrook’s sacrifice and reach out and not only run in honor of him but to bless him with this gift,” Greene County Sheriff Jim Arnott told KWTO. “I appreciate his foundation and what he stands for.”