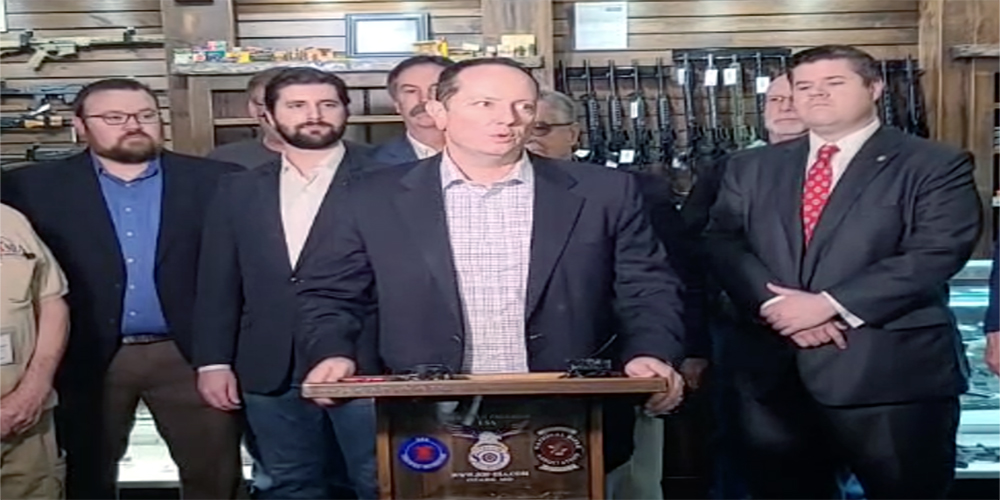 Lawmakers from across southwest Missouri gathered at Sound of Freedom gun range in Ozark Monday to talk about the passage of the Second Amendment Preservation Act.

State Senator Eric Burlison (District 20) lead the gathering, having shepherded the measure through the State Senate. (The House sponsors pushing the measure were Rep. Jered Taylor and Rep. Bishop Davidson.) Burlison said that even though forms of this bill have been around for previous legislative sessions, now was the perfect time to pass the bill.

Rep. Bishop Davidson (R-130) said that the bill does more than just protect rights; it also provides those who are defending Constitutional rights with a path to stop federal overreach in other ways.

“State’s rights, state’s authority being infringed, that’s not a new idea, that’s a centuries old idea,” Davidson said. “What the Second Amendment Preservation Right act does…is not only protect our Second Amendment from infringement by federal laws using our constitutional protections but it also lays out a road map for how we might push back against federal encroachment in the future.”

The event reached into issues beyond the actual bill, including comments about whether or not the educational system has been neglecting students when it comes to teaching on the Constitution.

“I would say across the board our nation has failed our children about teaching them what it is to be a republic,” Burlison said. “I was in Republic Middle School not too long ago and I asked the kids to raise their hands and tell me what form of government was the United States, and not one person thought it was a republic. They thought it was a democracy. To which I said ‘Help me do the pledge of allegiance to flag of the United States of America and to the democracy for which it stands.'”