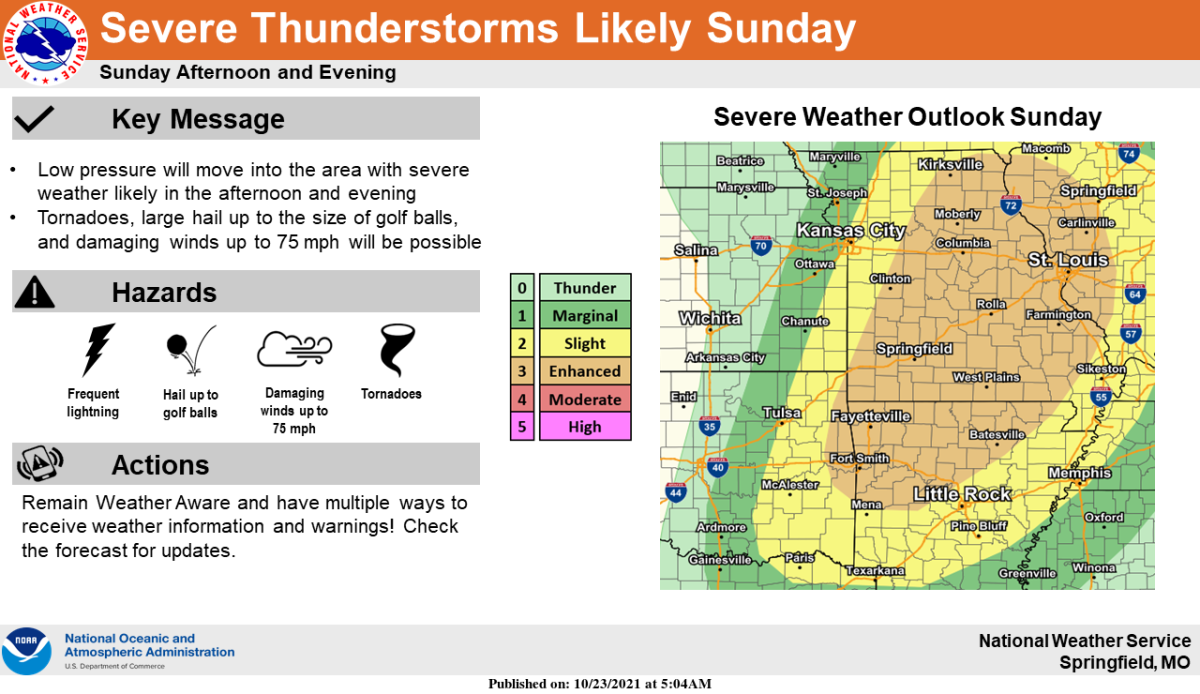 Severe thunderstorms are expected to push through the Ozarks from Sunday afternoon through the evening hours, with all modes of severe weather possible.

The National Weather Service in Springfield says large hail, damaging winds and tornadoes are all in the mix as supercell thunderstorms are possible out ahead of a line of storms.

Any supercell thunderstorm has the potential to produce significant severe thunderstorms.

As storms transition east through southwest Missouri, they have the potential to form a line, which would primarily produce more damaging winds.

Forecasters say the exact storm mode will continue to be monitored.

The highest potential for severe weather appears to be between 3 p.m. and 11 p.m. on Sunday.

Tornadoes: As far as tornado potential, the weather service says the highest probability will be east of a Joplin to Nevada line, which covers most of southwest Missouri.

The potential exists for tornadoes of EF-2 or greater across the Ozarks.

Damaging Winds: Significant damaging wind gusts of 75 miles per hour or greater are also possible, and storms that congeal into a squall line or bow will have the highest potential for significant wind damage.

Large Hail: The highest probability Sunday will be from the Springfield metro area and points north and east. Large hail up to the size of golf balls are likely in the most intense storms, and supercell (isolated) thunderstorms have the highest chances of producing large hail. Some potential exists for even large hail than golf balls, but remains uncertain at this time.

The severe storms should be moving into the Springfield, Branson and Rolla areas anytime between 5 and 9 p.m. Sunday.

Storms producing heavy rainfall rates have pushed through the Ozarks Saturday morning, but the risk for severe storms is marginal (level 1 of 5). Sunday will bring an enhanced severe weather risk (level 3 of 5).

We’ll keep you up to date with the latest watches, warnings, and damage reports on 93-3 and AM 560 KWTO.

Previous BILLY LONG: It’s the Economy, Stupid
Next Over 650 Residents without Power in West Springfield