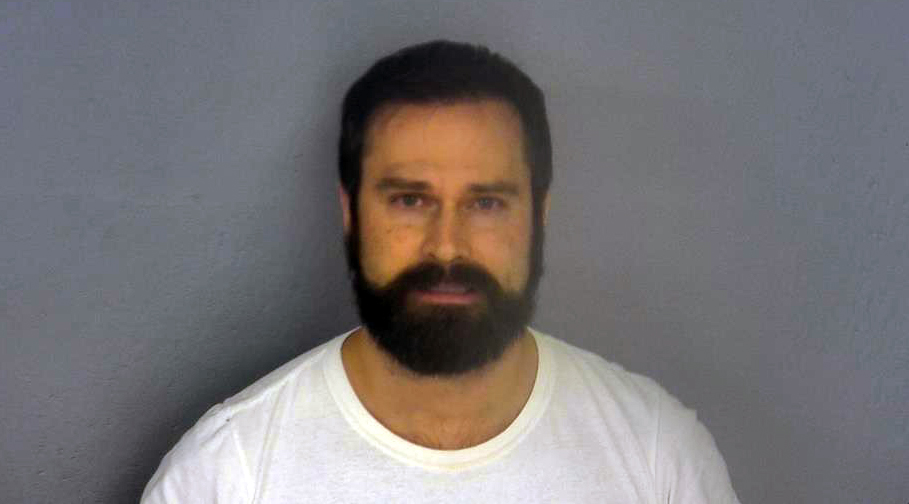 A Springfield preacher who is known for spending Friday nights near Park Central Square in Springfield using a megaphone or sound system to preach at downtown patrons has been arrested for domestic violence.

Brummitt has been arrested previously for illegally using a soundsystem in his downtown protests, including last year when he was arrested after an incident near the downtown Black Lives Matter rally.

Brummitt is the pastor of Lighthouse Ana Baptist Church of Springfield. The church’s website advertises their Friday night activities on the square as “Night of Truth.”

According to court documents, on Saturday January 23, Brummitt is alleged to have been in his office inside an RV when the victim, identified as J.B., approached and noticed he was reading emails. When she asked him what he was doing, he “quickly closed the laptop” and J.B. asked if something was wrong. Brummitt responded he had to “support the family” and J.B. asked him if he was hiding something.

The couple then began a verbal altercation. Brummitt then allegedly went into the home whose backyard the RV was parked in and returned with a black case which he put into a van. J.B. followed Brummitt as the argument continued, and Brummitt then entered the R.V. and locked J.B. outside in what the Springfield PD said was “25 to 29” degree weather.

J.B. pounded on the door of the R.V. be let in until she cracked the window in the door. Brummitt then opened the door enough to stick his hand out with a container to pepper spray J.B. in her face. After he pepper sprayed J.B., Brummitt then carried a minor from the R.V. to the van. J.B. said the child was not put into the van in a “safe way” and went to retrieve the child, when Brummitt grabbed her upper arm to pull her away from the van, leaving marks on her arm.

When he could not pull her away, Brummitt said J.B. was “going to come with” him and the minor. When he was unable to get her fully into the van, he pepper sprayed her a second time. J.B. left the van after the second pepper spray attack and Brummitt left in the van with the minor.

The police report says the minor showed a “negative reaction” to the pepper spray being used in close proximity.

The documents went on to say that on Sunday, January 24, J.B. asked Brummitt about the pepper spray incident and how her arm was bruised, and the two engaged in another verbal argument. Brummitt again used the pepper spray on J.B. in proximity to the minor. He forced her out of the RV, saying she would never see the child again, and she left and went to “a safe house for her church to report the incident.”

J.B. told police that Brummitt has used the pepper spray on her “6-7 times” in the last 10 months to keep her “submissive” and would also threaten to use the spray demanding that J.B. “submit.” She said he would use the spray in and out of the house, regardless of the proximity of the minor.

J.B. also reported a number of incidents taking place from April 2018 to the most recent incident. She mentioned a previous specific incident when she found out Brummitt had pictures of an ex-girlfriend on his computer, and when she attempted to leave the house in the van, he grabbed her and yanked her from the vehicle. He tried to drag her back in the house but was unsuccessful, while J.B. was yelling for help. Brummitt then put her in the van and “drove around aimlessly” as he was afraid someone would call 911. Eventually he took J.B. to a park about 30 minutes outside of Springfield and left her there without a phone. She was there about four hours before she used a stranger’s phone to call Brummitt to come back and pick her up.

J.B. said she had not been allowed to have her own phone for almost a year. She stated she was also only allowed to leave the house if Brummitt approved of it. The court document said “she would be put on a strict time frame and was only allowed to use however much money Aaron would give her.”

Police went to the home where the RV was located and found Brummitt inside with the minor. He came out to speak to police while the minor inside was crying. He was asked by officers if they knew why they were there, and he said it was because it had something to do with someone “being violent.”

Brummitt said the didn’t want to elaborate on how this person was violent. When asked if anything happened in the last few days, Brummitt allegedly said that he had an argument with J.B., and that J.B. had become “violent.”

When police asked him to expand on what he meant by “violent”, he said that he was trying to leave with the minor the previous morning and as he was loading the child, J.B. tried to pull him out of the van. He said J.B. then tried to get the minor from the van, and so Brummitt pepper sprayed her “in the face.” He said he took the minor inside and locked the door, at which time J.B. broke the door’s window “out of anger.”

After confirming he used pepper spray, Brummitt said it was just the previous morning and “a long time ago.” He said he kept the pepper spray for when J.B. was “being violent.”

Brummitt later told police at the Greene County Jail he had video on his cell phone that would disprove J.B.’s allegations against him but would not allow a police detective access to his phone or to view the video files.

As of Tuesday afternoon, Brummitt was in the Greene County Jail on $10,000 bond. He has no attorney listed in Missouri Casenet.

No one answered multiple calls for comment to Lighthouse Ana Baptist Church.