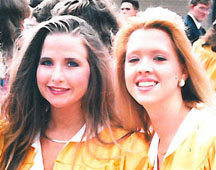 It was 29 years ago Monday that Sherrill Levitt, her daughter, Suzie, and Stacy McCall, disappeared from a home at 1717 east Delmar in Springfield.

Police believe Suzie and Stacy, who had just graduated from Springfield’s Kickapoo High School on June 6th, 1992, attended several graduation parties that night, and at some point, were seen in the Battlefield area.

The two are believed to have ended up at Levitt’s house.

On Sunday, June 7th, the day Sherrill, Suzie, and Stacy were reported missing, the front door of the house was left open and a family dog left behind, along with the women’s clothing, cars, keys, cigarettes and other personal belongings.

The Springfield Police Department has published the following information on the case:

On June 7, 1992, the Springfield, Missouri Police Department was notified of the disappearance of three women from a residence in central Springfield.

The parents of Stacy McCall, one of the missing women, contacted the police department in reference to their daughter’s disappearance from the home of Sherrill Levitt and Suzanne Streeter, the other two missing women. Upon officers’ arrival, the house bore no signs of a struggle, but rather the appearance of the missing women being abducted. All personal property was left behind including purses, money, clothing, cars, keys, cigarettes, and the family dog.

Stacy McCall and Suzanne Streeter had graduated from high school the day before their disappearance and were last seen at approximately 2:15 a.m. on June 7, 1992, when they left a graduation party in a nearby community en route to the Levitt/Streeter home at 1717 E. Delmar, Springfield. It appeared as though they had arrived at the residence because their clothing, jewelry, purses, and vehicles were still at this location.

Suzanne’s mother, Sherrill Levitt, was last heard from at approximately 11:15 p.m. on June 6, 1992, when she talked with a friend about painting a chest of drawers. Levitt’s car, purse, keys, etc., were left at the residence and it appeared as though her bed had been slept in when friends and police arrived to check the residence.

Sherrill Levitt: 11-01-44, 5′, 110 lbs., brown eyes, short bleached-blonde hair, naturally curly hair, longer on top and short in the back. Sherrill Levitt has a thin build and has freckles on her neck and upper chest area.

Suzanne (Suzie) Streeter: White female, DOB 03/09/73, 5’2”, 102 lbs., brown eyes, straight bleached-blonde, shoulder-length hair, large teeth with no dental work. She has a 3-1/2” scar on top of her right forearm and a small tumor in the left corner of her mouth which gives the appearance that she has something in her mouth.

With the assistance of the Federal Bureau of Investigations, Missouri State Highway Patrol, and numerous other law enforcement agencies, an extensive investigation into the lives of the missing women has been conducted with no positive leads concerning the reason for their disappearance or their location.

A reward fund of $42,000 has been established for the location and prosecution of the persons responsible for the abduction of the three women.

Anyone with information into the disappearance of Mrs. Levitt, Miss Streeter, and Miss McCall is requested to contact the Springfield Police Department or Crime Stoppers.