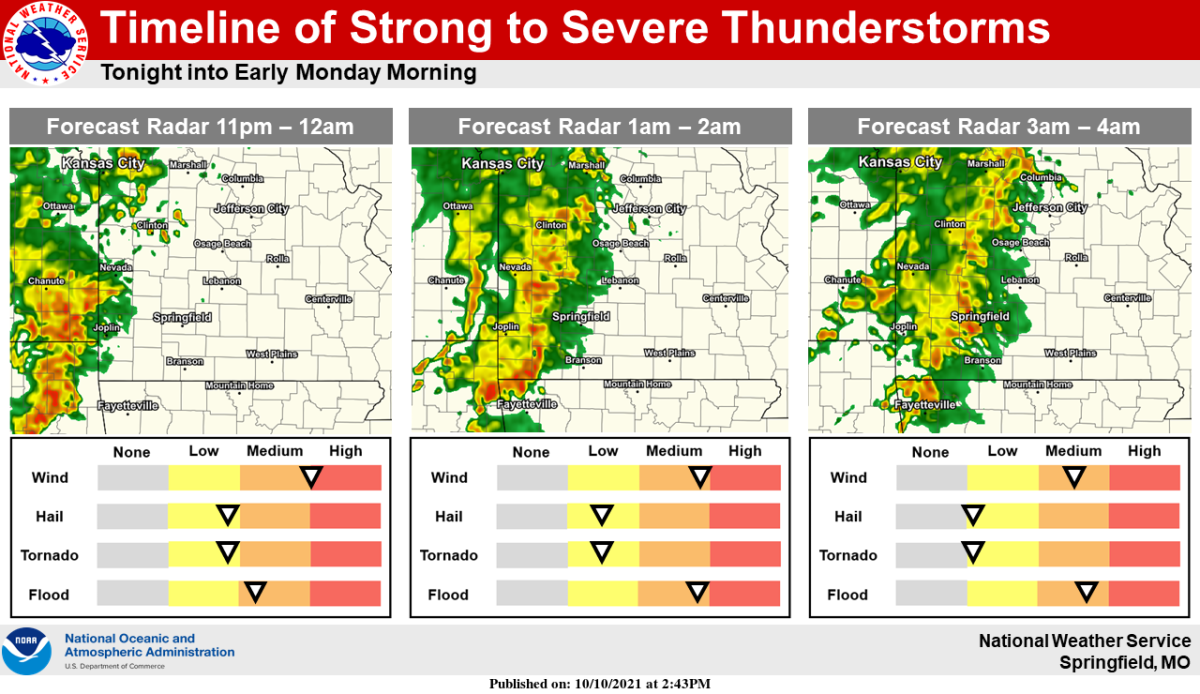 Severe thunderstorms with damaging winds and isolated tornadoes are possible late Sunday night into early Monday across parts of the Ozarks.

The Storm Prediction Center has issued a Tornado Watch for Barry, Jasper, Lawrence, McDonald and Newton Counties until 2:00 a.m. Monday.

The National Weather Service says a couple of embedded supercells and isolated tornadoes cannot be ruled out, especially in far southwest Missouri, which is under an “enhanced risk” of severe weather as outlined by the Storm Prediction center.

Forecasters say while the overall greatest chances for severe thunderstorms will be across northeastern Oklahoma, far southeastern Kansas, and far southwest Missouri, storms producing damaging wind gusts will remain possible overnight in the Springfield metro area and into the eastern Ozarks.

Primary hazards include damaging winds up to 70 miles per hour, lightning and localized heavy rainfall.

There’s a lower threat for large hail, but hail up to the size of quarters will still be possible.

The storms should move into the Springfield metro area somewhere around 2 a.m. Monday, with the main line of storms pushing out of the Ozarks by sunrise.

There’s a greater threat for flooding than earlier expected, with the National Weather Service issuing a Flash Flood Watch for areas west of Springfield from 9 p.m. Sunday through Monday morning.

Numerous thunderstorms containing high rainfall rates are expected to occur late in the evening through the overnight hours, with widespread amounts ranging from 1.5 to 2.25 inches through Monday morning, with isolated amounts up to four inches possible. .

We’ll keep you up to date with the latest watches and warnings on 93-3 and AM 560 KWTO.

Previous BILLY LONG: Big Tech and The Big Guy
Next At Least Two Probable Tornado Touchdowns in the Ozarks Overnight