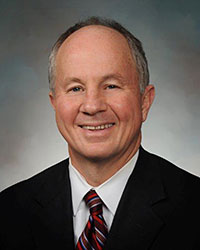 The Springfield City Council has announced the death of a local judge.

According to a new release from the City of Springfield, Chief Municipal Judge Todd Thornhill passed away on Friday, April 8th, 2022. He was 61-years-old.

Thornhill began working for the City of Springfield in 1993, and was named Chief Municipal Judge in 1994.

A statement from the City of Springfield can be read below:

It is with a heavy heart that we share the news that Chief Municipal Judge Todd Thornhill passed away Friday. He leaves behind a remarkable legacy of public service and will be missed.

Judge Thornhill joined the City in April 1993 when he was appointed Second Division Judge. In April of 1994, he was appointed as the court’s Chief Judge. As the Chief Judge of the Springfield Municipal Court, he presided over city ordinance violation cases, as well as being responsible for the day-to-day administration of the court.

Judge Thornhill achieved many honors during his distinguished career, including an appointment to a Missouri Supreme Court Municipal Division Work Group

in 2015. He was the only municipal judge selected for this honor.

In 2016, he was appointed to serve as a member of the Missouri Press-Bar Commission to foster better communication between the media and the bench and bar.

In 2019, he was awarded the Missouri Municipal and Associate Circuit Judges Association George Pittman Award. The distinguished winners of this award are chosen based on their service to the association through writings, lecturing, and serving as an officer or director of the association. It recognizes the honoree’s contributions to the association which substantially exceed those normally expected of officers and board members.

After graduating from Missouri State University in 1983 with a bachelor of arts degree in philosophy, Judge Thornhill attended the University of Missouri-Columbia School of Law. He graduated from MU in 1987 with a juris doctor degree.

Upon graduation, he worked in private practice with the Springfield law firm of Woolsey, Fisher, Whiteaker and McDonald until 1990. From 1990 until 1993, Judge Thornhill was an attorney with the law offices of Robert M.N. Palmer in Springfield.