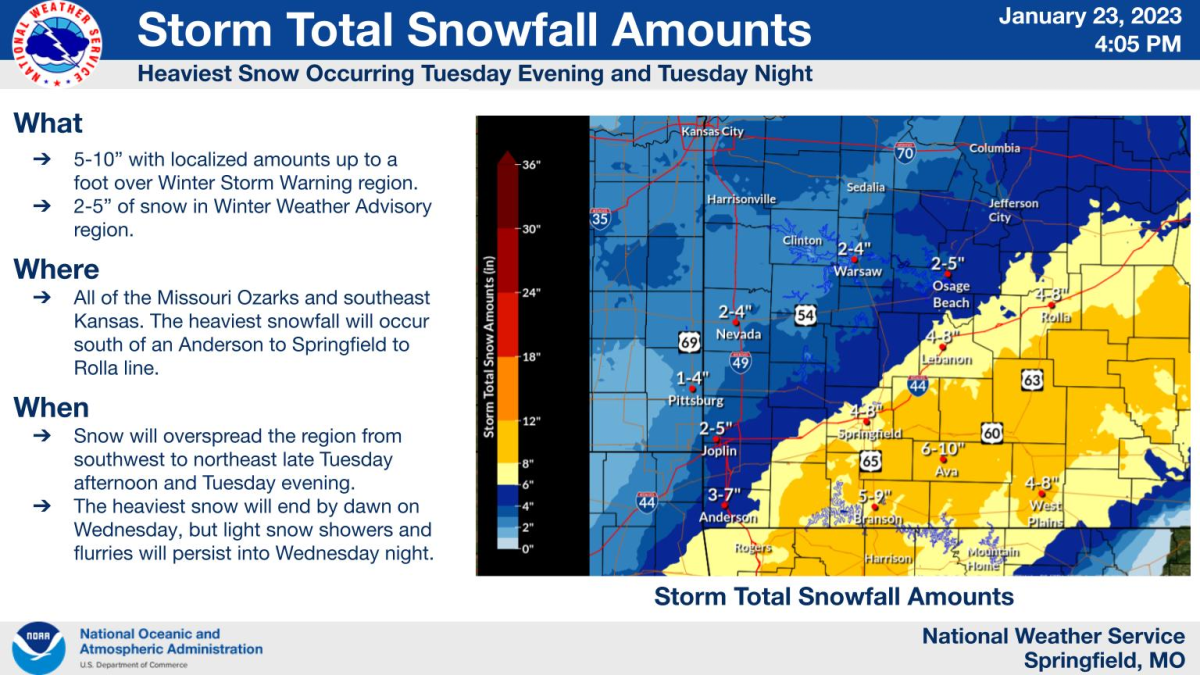 UPDATE: Winter Storm Warning Issued For Areas Along and South of I-44 For Heavy Snow Tuesday Evening Through Wednesday Morning

The National Weather Service has now upgraded the approaching storm to a winter storm warning, beginning at 4 p.m. Tuesday afternoon.

The warning will be in effect until 9 a.m. Wednesday morning for areas along and south of I-44.

NWS says snowfall amounts could range from five to ten inches, and even up to a foot in some localized areas.

The National Weather Service says areas along and southeast of I-44 have the greatest potential for higher snow totals from the storm Tuesday evening into Wednesday morning.

Amounts of three to six inches are likely, with localized amounts of up to seven inches in the watch area.

Forecasters say changes to the amounts and locations are likely as we approach Tuesday night.

Original Story: A winter storm is expected to hit the Ozarks starting Tuesday evening and continuing through Wednesday morning, bringing heavy snow at times and the potential for four to six inches of snow.

The National Weather Service has issued a Winter Storm Watch for areas along and south of I-44, including the city of Springfield, beginning Tuesday night.

Locally heavier amounts of snow will be possible.

Travel could be very difficult.

The hazardous conditions could impact the Tuesday evening and Wednesday morning commutes.

Get statewide road conditions during the winter storm with the MoDOT Traveler Information Map, and listen to 93-3 A-M 560 KWTO for updates on the winter weather and changes to the forecast.