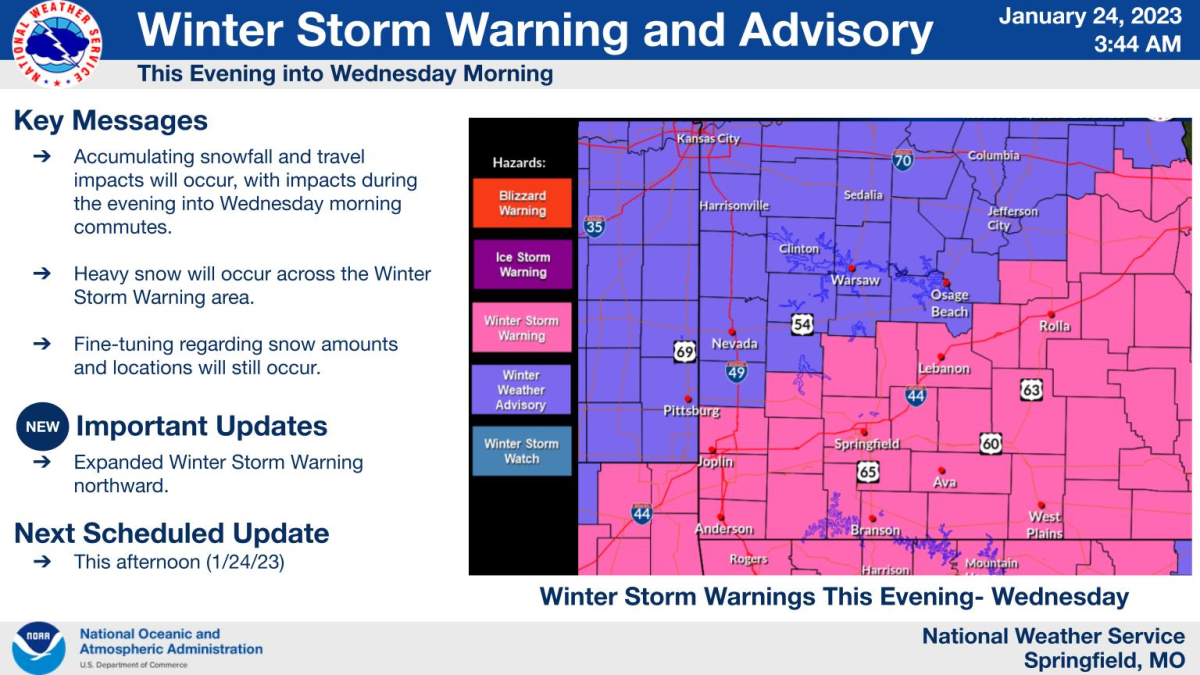 Winter Storm Latest, Along With Statewide Road Conditions: 5 to 8 Inches of Snow Tuesday Evening Through Wednesday Morning, With Some Locations Getting up to a Foot

9:30 P.M. Update: The National Weather Service says bands of heavy snow continue to move across southern Missouri and northern Arkansas. Where bands move through, snowfall rates in excess of 1 inch per hour will occur. Snowfall measurements across portions of northern Arkansas have been between 4-8 inches, with additional snow falling. The forecast remains the same for the Missouri Ozarks with 5-9 inches of snow along and south of I-44, with isolated areas of up to 10 inches or more. Areas north of I-44 should see 2-5 inches of snow as snow continues overnight into Wednesday morning.

3.0 inches of snow on the ground in West Plains, with roads in Howell County mostly covered with snow. The MoDOT Traveler Information Map is showing most roads south and southeast of Springfield mostly snow-covered.

6:00 P.M. Update: Roads are mainly wet across the Ozarks, but we’ve had several reports of a wintry mix of precipitation Tuesday afternoon, including light snow near Table Rock Dam, grounds and roads covered with snow in Bolivar, large snowflakes in Buffalo, a rain/snow mix in Evening Shade, rain changing over to snow in West Plains.

Rain is expected to continue to change-over to snow through Tuesday evening and ramp up in intensity in the late night and overnight hours.

The National Weather Service says heavy snowfall rates of one inch per hour or greater are expected over the next few hours south of Springfield along the Missouri-Arkansas border.

Snowfall totals are expected to be 5-8 inches from Springfield to Lebanon, with 5-9 inches in Branson and 6-10 inches in Ava. The Joplin area is expected to receive 3-6 inches of snow, with 2-4 inches from Nevada to Warsaw.

In addition, the Winter Storm Warning has been extended until Noon Wednesday for Laclede, Wright, Pulaski and Howell Counties.

A winter storm will bear down on much of southwest Missouri starting late Tuesday afternoon, with snowfall rates overnight into Wednesday morning approaching one inch per hour.

The National Weather Service says a Winter Storm Warning is in effect from 4:00 p.m. Tuesday through 9 a.m. Wednesday for areas along and south of a line from Joplin to Bolivar to Lebanon.

Five to eight inches of snow are possible in the warned area, with two to five inches of snow expected in the northern Ozarks, which are under a Winter Weather Advisory.

The heaviest snowfall should occur south of a Cassville to Springfield to Rolla line.

Snow will overspread the region from southwest to northeast late Tuesday afternoon and evening.

The heaviest snow will end by dawn on Wednesday, but light snow showers and flurries will persist into Wednesday night.

You can also call 888-ASK-MODOT and speak with a customer service representative for road conditions.