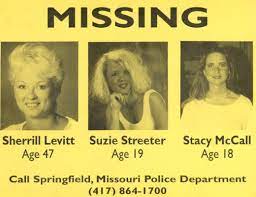 One June 7, 1992, Stacy McCall, Suzie Streeter and Sherrill Levitt disappeared from a home on east Delmar near Glenstone in Springfield.

Thousands of leads later, the case remains unsolved. There have been multiple suspects over the years, but none that police or prosecutors have been able to make a case against and present charges.

There have been multiple digs over the years based on tips, but none of them have turned up remains.

A candlelight vigil marking 30 years since the women disappeared will be held Tuesday night at 7:30 in the Victim’s Memorial Garden at Phelps Grove Park.

Janis and Stu McCall, the parents of Stacy McCall, say they weren’t going to have another vigil, but did this one at the request of the Springfield Police Department, who is hoping it will help generate new leads in the case.

Tuesday at 7:20 a.m. and 9:20 a.m., Kevin and Chris on 98.7 The Dove will have clips of personal interviews with Janis & Stu McCall, retired Springfield Police Officer Rick Bookout, who was the first responding officer to the home on east Delmar, and podcaster Anne Roderique-Jones, who has taken an in-depth look at the case.

The news release below is from the Springfield Police Department:

Springfield, Mo. – On June 7, 1992, the Springfield, Missouri Police Department was notified of the disappearance of three women from a residence in central Springfield.

The parents of Stacy McCall, one of the missing women, contacted the police department in reference to their daughter’s disappearance from the home of Sherrill Levitt and Suzanne Streeter, the other two missing women. Upon officers’ arrival, the house showed no signs of a struggle, but rather the appearance of the missing women being abducted. All personal property was left behind including purses, money, clothing, cars, keys, cigarettes, and the family dog.

Stacy McCall and Suzanne Streeter had graduated from high school the day before their disappearance and were last seen at approximately 2:15 a.m., on June 7, 1992, when they left a graduation party in a nearby community and traveled to the home of Levitt/Streeter at 1717 E. Delmar, Springfield. It appeared they had arrived at the residence because their clothing, jewelry, purses, and vehicles were still at this location.

Suzanne’s mother, Sherrill Levitt, was last heard from at approximately 11:15 p.m., on June 6, 1992, when she talked with a friend about painting a chest of drawers. Levitt’s car, purse, keys, etc., were left at the residence and it appeared as though her bed had been slept in when friends and police arrived to check the residence.

Sherrill Levitt: White female, DOB: 11/01/44, 5′, 110 lbs., brown eyes, short bleached-blonde hair, naturally curly hair, longer on top and short in the back. Sherrill Levitt has a thin build and has freckles on her neck and upper chest area.

Suzanne (Suzie) Streeter: White female, DOB: 03/09/73, 5’2”, 102 lbs., brown eyes, straight bleached-blonde, shoulder-length hair, large teeth with no dental work. She has a 3-1/2” scar on top of her right forearm and a small tumor in the left corner of her mouth which gives the appearance that she has something in her mouth.

A reward fund has been established and is available for distribution to the person(s) with information regarding the location of the missing women and/or the prosecution of the person(s) responsible for the abduction of the three women.

Anyone with information into the disappearance of Mrs. Levitt, Miss Streeter, and Miss McCall is requested to contact the Springfield Police Department at (417) 864-1810 or (if you wish to remain anonymous) to Crime Stoppers at (417) 869-TIPS.